Aviva’s new but already popular Aviva Wrap funds platform is adding a new lower cost tier for larger fund investors. The table extract below shows how it stacks up from February 17th next.

If you hold ISA or general (non-ISA) investments (or have a SIPP or similar personal pension) with any provider and are interested in an up-to-date price comparison and/or discussing the recent reductions in platform costs across UK investments providers, please call us on 0845 013 6525. 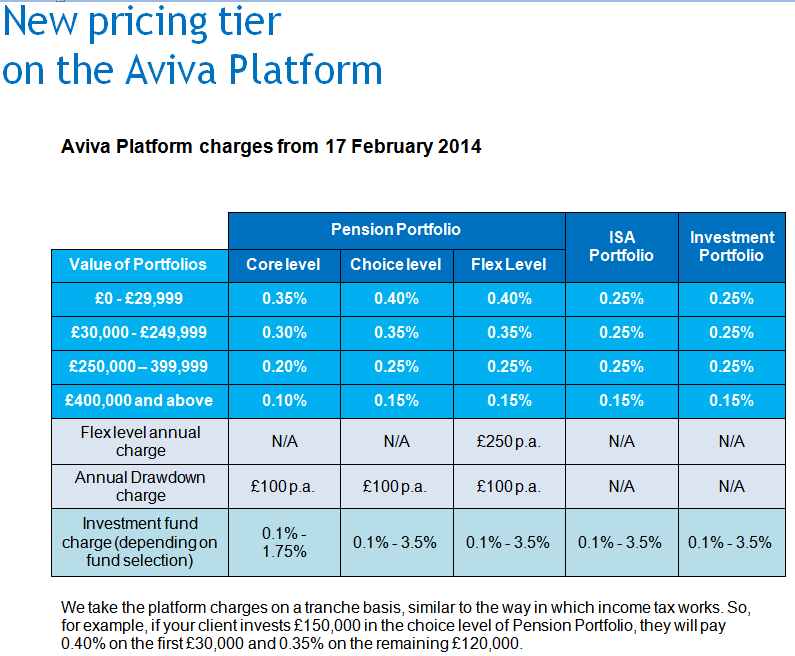 We have all seen and heard news about the power companies bleating on about how they are only passing on increased costs, and that their margins are slimmer than a cigarette paper, as they whack up their prices yet again and somehow make record profits every year (even after the board’s bonuses). Plenty has been written and spoken about the tactics and smokescreens of NPower, E.on, British Gas & cronies. However a recent further example of stealth billing put my back up recently, and which seems just so typical of how British companies treat consumers nowadays, that I thought I’d share it with you – if only to get it off my chest.

My business numbers are with BT.  I received what looked like an innocuous piece of junk mail a few weeks ago – a single, colourful sheet of paper from BT , (printed on one side with a really small font).  Fortunately I read it before binning it. The letter said they were going to start billing me “a small charge” of £122.88 +VAT per year (£147.46) for each of my listings in the classified section of the phone book. To keep my existing (formerly free) listing I “didn’t need to do anything”, as they will just automatically add the charge to my bill every quarter.  Stealth billing rule #1 – get in under the radar by giving minimal information in a low-key chatty manner, then take the money via a DD that’s in place.

I didn’t want to pay for any phone book entries as I don’t believe anyone uses the classified book much anymore (it’s not really even Yellow Pages any more), so I called to cancel. But on ringing BT and stating my intent I was surprised to immediately be offered a much cheaper deal of less than half the quoted price “because I was a BT customer”. Isn’t everyone? I asked.  “Well… er, some non-BT customers choose to advertise in the BT classified book”. Hmm I’m not so sure about that. Either way, they knew all along of course that I was a BT customer (they wrote to me after all), and, if they truly had a two-tier pricing structure, they should have offered me the lower price in the first place.  Stealth billing rule #2:, if the first attempt doesn’t work and the customer cottons on, make up some cock and bull story about discounting it and have another bash at making some money that way.

Now if BT has a cheaper price for its customers, will they charge that cheaper price to all those customers (presumably the vast majority) who ignored the little one-off flyer (or simply didn’t care) and did nothing?  I think we all know the answer to that one. Hardly treating customers equally is it? Stealth billing rule #3: Don’t worry about people paying different prices for the same service. It’s OK if the quiet majority get shafted.

There’s a theme here that’s pertinent to us IFAs. We are constantly nagged and reminded by the FCA to treat customers fairly and be seen to do so by publishing our various fees and charges for every situation and explaining them at length (ad nauseum some might say) to clients, and the FCA will, on a visit, check this area most carefully. Any routine discounting of fees for example is something they don’t like at all – it’s against the fairness principle to charge different fees for the same service. But while they’re micro-managing little IFA outfits like me, the OFT is happy for BT and other giants to just go ahead and make money from consumers by any method they can get away with.

There just seems a palpable lack of integrity in the major consumer markets nowadays, with senior executives aiming at maximisation of short to medium-term profit rather than the long-term.

The BT thing doesn’t constitute much more expense to even a small business, but to BT of course an extra £122 for every line entry in the classified section of every directory in the land adds up to a nice little earner. And of course what BT , the high street banks (they’ve been at it for years – they don’t need a DD they just dip into the punter’s account……but I digress) and some other major British businesses are doing isn’t illegal. They check with their legal advisers and ensure their sales processes fit within the relevant legislation and their T&Cs ( which they can more or less amend unilaterally anyway). They rely on the letter of the law, never the spirit of it, and push the boundaries wherever they think it worth the risk.

For me it just demonstrates UK big business’ growing contempt for the customer. They know that the typical UK consumer is trusting and accepting, and they are taking more advantage of that than ever before. For them, it’s not about fair prices or providing a good service for customers any more (if it ever was), it’s about exploitation.