Well the cooler weather has set in now and the carp are changing their tastes a bit. I am reliably informed I should ditch the sweetcorn and look to using punched bread on the hook – particularly for float fishing, or maybe bread paste. Fishermen have a tool for everything so now I need to go find a bread punch. Apparently it stays on the hook better than bread paste, which I used almost exclusively as a lad. Also I should use fresh white long-life “wonderloaf”, cut off the crusts, microwave it for about 20 secs to make it pappy, then then roll with a rolling pin. Then cling-film the slices separately and punch as needed. Uh-huh…

Alternatively I could just stick a lump of crusty bread on the hook and hope. We shall see.

Also maggots! (yuk) are apparently favoured by carp in the cooler weather. I think I’ll try the bread. Meanwhile it looks like the smelly mix is still working for the ledger rod – I tend to use a small feeder packed with a mix of marine halibut with a 3″ hair rig holding a 8mm pellet (the same bait but more solid). The fish practically catch themselves on this rig so I wonder if it’s cheating a little.

Meanwhile I was out again the other weekend although my usual fishing buddy Andy didn’t come. It was pretty quiet until I switched swim.  It’s weird – I began fishing about 15 ft to the left of where I’d been and started getting lots of action. 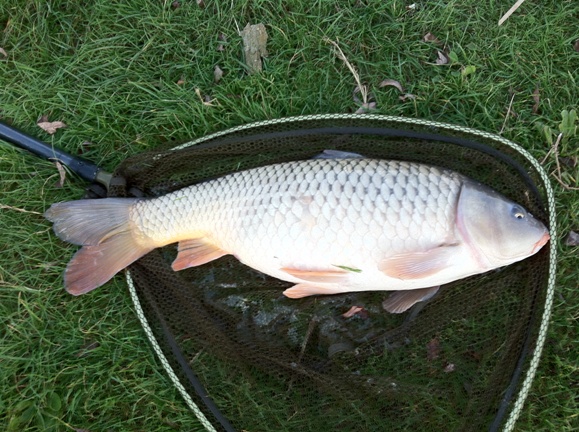 As usual nothing massive but this fed-up looking 3 1/2 to 4 pounder was the best of several similar sized common and mirror.

It was pretty quiet out there but at least I had Val the water vole  to keep me company. Here he/she is taking a dip.