European Bureaucrats keep coming up with daft ideas which somehow, after years of solemn deliberation and noses (and front trotters) in troughs, get passed into laws and imposed on us sensible Brits. The reasoning within the Gender Directive is that it is somehow inappropriate to treat men differently to women and vice versa.  So even though we typically live for differing terms, are exposed to differing risks in our daily lives and suffer differing illnesses along the way, we can no longer be treated differently in insurance related contracts becuase of “gender equality”. It’s a bit like a Frenchman saying there is “now no difference between men and women”  – Yeah right! (unless he’s referring to Eastern bloc Olympic athletes from the 70’s perhaps) “Vive le Difference” I say, but nevertheless we’re stuck with this latest bit of Euromerde.

What you need to know:

From 21 December 2012, it will not normally be lawful to offer customers different insurance rates for males and females. This means that annuities and life and health insurance will generally need to be written on unisex terms.

This means that we expect annuity rates for men to worsen somewhat as they move closer to the existing level for women (women typically live longer than men so men’s annuity rates have traditionally been better). This will apply to open market options on personal pensions and occupational defined benefit, but not to Scheme Pensions (annuities obtained on the member’s behalf through occupational schemes).

Finally, for health insurance like income protection, where claims may be made long-term where the insured cannot work due to accident, injury or illness, men’s rates will worsen somewhat as they approach womens rates (we men are healthier, but die younger).

The reason for the current differentials in rates is simply because of the differences in lifespans and claims experience, all duly noted by actuaries with decades of data and experience. It is entirely fair to charge more to insure a male white-collar worker’s life than the equivalent woman, because he represents a higher risk to the insurer simply because he is a man. Now we have legislation which seeks to put an end to this “injustice”.

This only affects contracts written from December 21, 2012, so if you wish to effect a contract such as some life cover or an annuity or income protection, and will benefit from the old-style pricing, there is a window of opportunity for the next few months.

Perhaps Brussels, having concluded their work on legislating against human biology, should now legislate the weather. How about all European states enjoying more sunshine days in the year must into a common fund to pay for the holidays of inhabitants of the cooler, wetter countries. What do you mean, they want to tax our fresh drinking water? Windermere will do nicely will it ?  OK sorry I mentioned it. 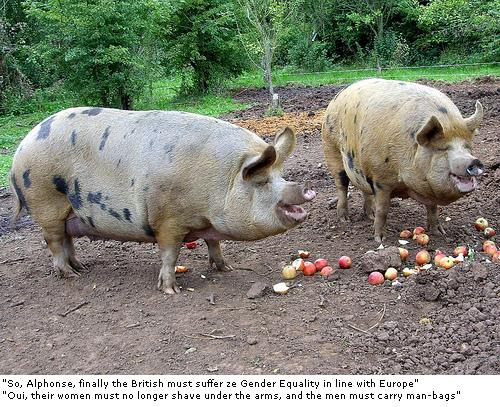